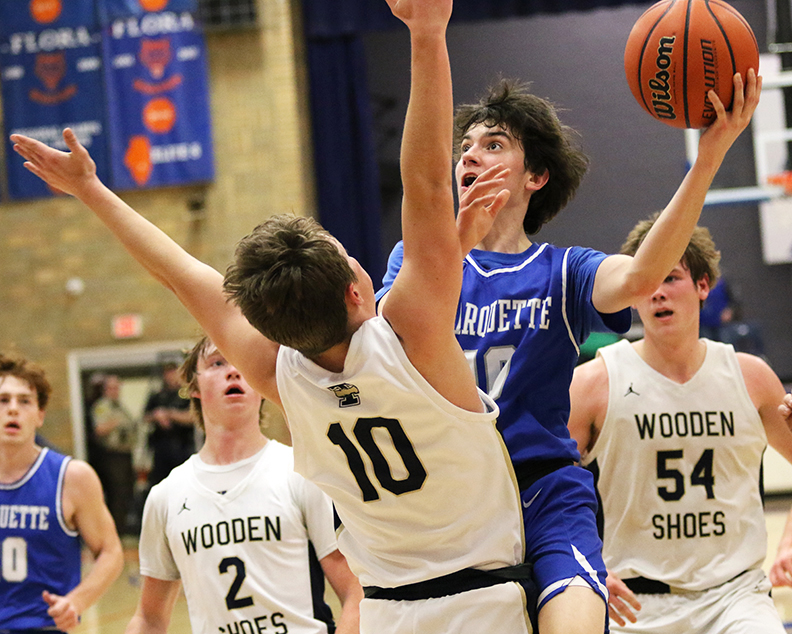 FLORA – The defense was relentless and the offense was tough for two quarters Tuesday night at the Flora Class 2A Sectional.

And that was precisely the script written by Marquette Catholic Boys Basketball.

But Marquette’s four-time halftime lead would vanish, along with anything near perfect, in the final 12 minutes of the game and the Teutopolis Wooden Shoes came back to defeat the Explorers 41-33 in semi-final at Conley Gym.

The Shoes, after becoming the 30th program in state history to win a 35th regional, move to 25-7 and advance to Friday’s title game to face the winner of Wednesday’s semifinal between Pana (29-3) at Mount Carmel (22-9) . Marquette, regional champion for the eighth time in 11 years and who turned down a fourth consecutive semifinal victory in a section, finished 19-12.

The Explorers lead was 8-7 after a quarter and three-point play from Owen Williams, a mid-range jumper from Kendall Lavender and another 3 from Macias was enough offensively to give the Explorers a 16-point lead. -12 at halftime.

“When you limit possessions, with the strength and physicality of those T-Town boys, you don’t have to bounce back and defend them so many times,” Medford said of the first half. “I think it went very well, apart from some live ball turnovers that turned into points. It was really good.”

Marquette led his Princeton attack for more than a minute before Macias’ trey with 2:38 remaining brought the final points in a methodical, but intense first half.

“I thought that was how it was going to be, they would make us keep our possessions for a long time and break us down. And they did,” said Reeder, brother of Jersey coach Stote Reeder. “They got three open looks from Macias on the breakdowns of a stock that we covered over and over and over and over. Congratulations to them. They perform very, very well.

But the Shoes received an immediate boost in the third quarter when Brendan Niebrugge hit a 3-pointer to cut Marquette’s lead to 16-15. It was an indispensable mark for the mental well-being of T-Town.

“To see the ball go in the hole, on the first play, was huge for our guys,” Reeder said. “You could feel them breathing.”

But what Macias did to give Marquette a first-quarter lead, running back Braden Kline replicated to keep a third-quarter lead. Kline followed Niebrugge’s 3 with a 15-foot jumper and came right back with a 3-pointer to rebuild the Explorers’ lead to 21-15 with 5:52 left in the quarter.

Kline hit another 3 to get all of his eight points in three minutes and Williams scored on a break to give Marquette their biggest lead at 26-19 with 3:56 left in the third quarter.

“Coming out in the second half, they hit a 3 straight away,” Medford said. “But we responded, came back and Braden had some great shots.”

T-Town’s Dylan Pruemer made a 3-pointer to pull the shoes even at 28-28 after three quarters. And Williams’ 3-pointer with 5:11 left would be Marquette’s only field goal in the final quarter — Kendall Lavender then added two free throws — and T-Town retired with the game’s final six points.

“We were lucky to get enough shots to close the gap in the second half,” Reeder said. “Our guys stepped up and made some big plays.”

Williams scored 10 points for Marquette, who got nine points from Macias and eight from Kline. T-Town, whose fans made the 37-mile trip to Flora in droves and outnumbered the Marquette crowd by about 10 to 1, was trailing James Niebrugge’s 11 points. The Shoes’ regional title was their 12th in a row and the 20-win season is their 13th in a row.

“They came out, they had a lot of people and they brought the energy,” Williams said of the Shoes. “We kept it close, but we couldn’t finish it.”